Damian Roden: A comparison of injuries between the 5 weeks prior to, and following the first league game of the season

Zone7’s newly appointed Data Research Analyst Ben Mackenzie has interrogated an appropriate portion of Zone7’s huge football data-lake to explore the 5 weeks prior and post the first league game of the season. In doing so, he aims to help practitioners to best prepare for the start of the season. 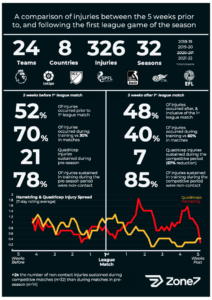 In this article, Damian Roden, a Zone7 Performance Consultant who has previously worked as the Head of Performance at Premier League clubs like Manchester City, Stoke City, Blackburn Rovers and Bolton Wanderers, has offered to provide his personal perspective on these findings.

Playing football from day one of pre-season not only stresses the joints, connective tissue and the different energy systems in the same way in which they are required to be used in a game, it also helps players immediately regain control and coordination of movement. A lack of such movement can be a key contributor to injury. However, too much exposure of the same movements on consecutive days can ‘over stress’ soft tissues at a time when players are lacking control and coordination, therefore increasing injury risk, so frequency, intensity and type of football practices are all key considerations.

An excess of practices in small areas and too much repetitive kicking and running actions being performed during early pre-season training sessions, or during a fatigued state, may account for the high amount of quadricep injuries. This is something which is magnified if players have not performed such actions for a long time during the off season.

If players are fresh, they can train and play at a high intensity. The greater the intensity the faster the players must filter information, make decisions and act on the information in order to execute the desired outcomes effectively (pass, dribble, cross, shot, turn etc), so not only do they improve their fitness, but they get better at what they do (…play football).

When players develop fatigue and consequently lack ‘freshness’, the intensity of the training session is lower, the decision-making process is not as fast, the need to execute specific techniques is less and players end up playing ‘less intense’ football.

Performing multiple training sessions per day or exposing players to the same stimulus on consecutive training days ultimately dilutes the ability to play at a high intensity and prepares players less for the actual demands of a competitive game. Furthermore, insufficient recovery between training sessions and games will have the same negative effect, causing players to encounter more and more fatigue.

This may account for the surge in non-contact injuries in matches, particularly hamstring injuries, where the intensity is arguably a lot higher than that of the training sessions and matches in pre-season, causing players to overreach to sustain a higher level that they are used to. 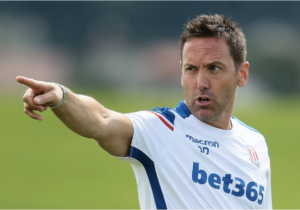 When planning a well-thought-out and balanced pre-season to avoid injuries yet prepare players for the demands of the competitive season, it is important to start with relatively lower intensity training sessions to ease players back in before moving towards higher intensity sessions.

This means the training sessions primarily consist of components that have the least intense exercises and the least amount of high intensity. For example, a small number of stride-outs to start to prepare muscles for maximum effort and football exercises in medium to large spaces. Once this foundation has been established training sessions should consist of components that have more intense exercises and a large amount of high intensity. For instance sprinting exercises to prepare for the games in the competitive season and more intense football exercises in smaller areas.